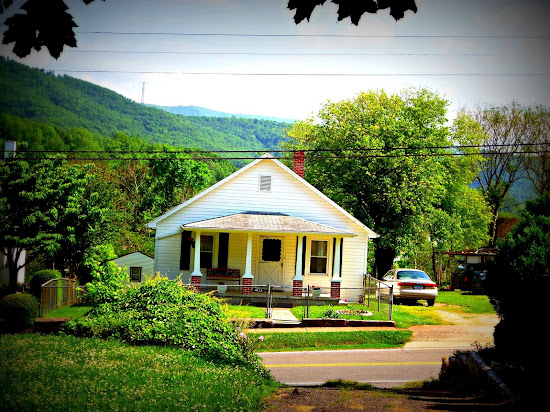 The other day I drove out to Christian's girlfriend's house to pick her up after school so she could come to Christian's baseball game. We got there a little early. Here I am, sitting in her driveway, waiting...of course I have a camera! I noticed this house across the street while parked in her drive-way. I'm thinking...some sweet little old couple live here. This was their first house they ever bought. You know, grandparents are that way. More stable than we are today. They worked hard, saved to buy a house and start a family and never left. That's what people used to do.

My generation, we get transferred to different areas for work. That's what happened with us. Well, let me give you a little back-story for those that don't know. My husband and I were born and raised in San Diego, Ca. He enlisted in the Marine Corps right out of high school. We never got far. Wanting to see new things after he got out, we moved to the area of Springfield, Mo, after having 2 children (Ashlyn and Christian) and wanting to raise them in a smaller community. Nick has family in Missouri so we wound up there. Job transfers moved us to Georgia and now here, Botetourt County, VA! I wouldn't change a single thing. But then there is something to be said about the way things used to be. A husband and wife marrying, saving their money, buying their "dream home" and raising a family in the same home, retiring in the same home and having grand-kids come visit in that same home. That's what I think of when I see little houses like this.

A couple of minutes later, Christian's girlfriend arrived and we headed home. Oh, and he won his game :)

It's Memorial Day weekend here in the USofA. Some say this is the official start of summer. Memorial Day (Monday) is actually a holiday to remember those who gave their lives for our freedoms. I get annoyed with people who confuse this with Veteran's Day in Sept or link the 2 together.

Have a great weekend! I'll have a surprise for you on Tuesday! Sneaky, I know ;)