Snake in the Grass 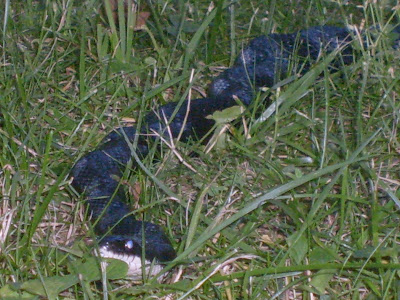 This is our resident Black Rat Snake . I've shown a photo of him once or twice before. Remember he was too close to the house and freaked me out so my neighbor picked him up and moved him into the woods. A couple of weeks later, he was spotted again, same location. Then yesterday afternoon we found him cruising around the front yard. Since I know to look for him, and he's basically harmless and does some good, (yes I've heard some snakes are capable of doing good, this one for instance by keeping the rodent population down), and it seems he thinks our casa is his casa so he's welcome to stay, as long as he doesn't sneak up on me,lol...Look though at how curly he looks. I've never noticed a snake looking so curly but then when I read the link it says that when startled they will freeze and wrinkle themselves into a series of kinks. He must have been worried we were going to move him again,lol
Posted by Tanya Breese at 9:05 AM