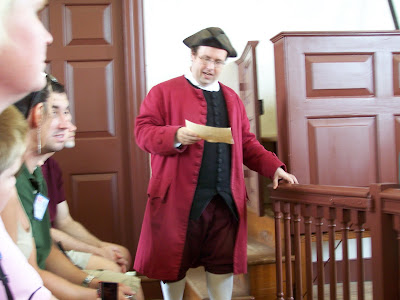 Important events announced at the courthouse:

Williamsburg's citizens assembled at their courthouse at 1:00 p.m. Thursday, May 1, 1783, to celebrate at last the end of the war with England – just as they had gathered seven years earlier to hear lawyer Benjamin Waller proclaim from its steps the Declaration of Independence.

Led by four standard bearers, a herald riding a gelding, and the mayor and his aldermen bearing the city charter, the throng marched down Duke of Gloucester Street toward the College of William and Mary. They carried a proclamation announcing the initialing of the Treaty of Paris and, nearly two years after Yorktown, the end of the Revolution.

The footsteps echoed off the brick facade of the Courthouse, the sound of the footfalls bouncing between the broad stone steps and the white portico. Ordered from England, the steps had arrived from a London merchant in 1772, but there were no columns – possibly none had ever been intended. Their absence jarred the eye a little at first.

This picture is taken from inside the courthouse where a mock trial is taking place. Three plaintiffs are chosen from the audience as well as a group of jurors, which Nick was picked as a juror. Fun to watch!

For more info on the courthouse, click HERE
Posted by Tanya Breese at 8:35 AM