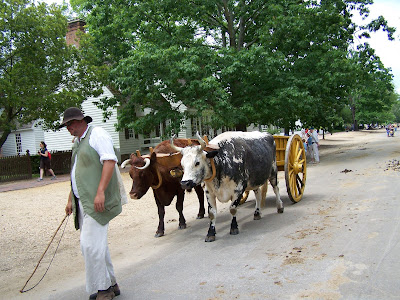 Oxen were commonplace in British colonies starting in the 1600s. Plantation owners and small farmers relied on them for all sorts of tasks as well as for milk, meat, hides, and fat. During the Revolutionary War, oxen hauled supplies; they were links in the Continental Army's logistical network. In September 1781, Williamsburg citizens saw what was probably the largest assemblage of cattle in the town's history when George Washington's supply column passed through on its way to the Battle of Yorktown.

Oxen remained the main beasts of burden until late in the nineteenth century, when horses and mules replaced them.

Colonial Williamsburg has used oxen in historic interpretation for more than four decades. Holsteins came first in 1963 for "Life on the Street" programs. Over time, the Holsteins were replaced by two rare breeds.

The Coach and Livestock Department has eight oxen—Milking Shorthorns. It has also used Randalls. The American Livestock Breeds Conservancy recognizes the breeds as endangered. By caring for and using these animals in educational programs, Colonial Williamsburg is helping to preserve their bloodlines.

The Milking Shorthorns are one of the oldest recognized breeds in the world. They came to the United States, Virginia specifically, in 1783. Their forerunners apparently existed during the 1500s in northeastern England.

Milking Shorthorns spread rapidly across the United States. Farmers in the North and Midwest readily accepted them, and the first herd was established on the west side of the Mississippi River in 1839. During the nineteenth century, American farmers admired the animals for their strength, the quality of their meat, and, most important, their milk. But by the early 1980s, Milking Shorthorns were in dire straits. Thanks to a concentrated twenty-year rescue effort, about 10,000 of these red and white cattle now exist worldwide.