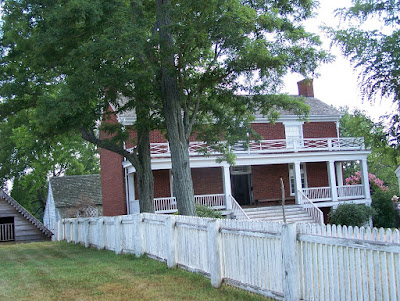 On April 9, 1865 after four years of Civil War, approximately 630,000 deaths and over 1 million casualties, General Robert E. Lee surrendered the Confederate Army of Northern Virginia to Lieutenant General Ulysses S. Grant, at the home of Wilmer and Virginia McLean in the rural town of Appomattox Court House, Virginia. General Lee arrived at the Mclean home shortly after 1:00 p.m. followed a half hour later by General Grant. The meeting lasted approximately an hour and a half. The terms agreed to by General Lee and Grant and accepted by the Federal Government would become the model used for all the other surrenders which shortly followed. The surrender of the Army of Northern Virginia allowed the Federal Government to redistribute forces and bring increased pressure to bear in other parts of the south resulting in the surrender of the remaining field armies of the Confederacy over the next few months.
Posted by Tanya Breese at 8:17 AM