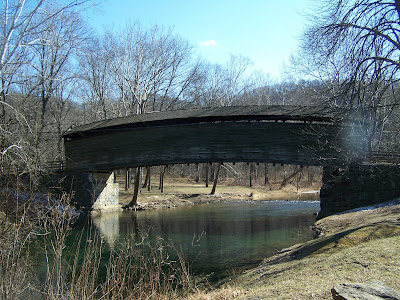 In terms of seniority, the venerable Humpback Bridge lays claim to being the oldest of Virginia's remaining covered bridges. Located in Alleghany County, just west of Covington, it was built in 1857. It was part of the James River & Kanawha Turnpike (JR&KT) and it succeeds three other bridges at the site. It stretches over Dunlap Creek, which is a tributary of the Jackson River that joins the Cowpasture River, near Iron Gate to form the James River. The first structure was built in the 1820s and was washed away by a flood on May 12, 1837. The second fell victim to the flood of July 13, 1842 and the third, as the annual report of the JR&KT company put it, "gave way" in 1856.

The 100-foot-long, single-span structure is four feet higher at its center than it is at either end, thus the name, "Humpback". Traffic across the bridge ceased in 1929 when it was replaced with a "modern" steel truss bridge. It stood derelict (and was even used by a nearby farmer to store hay) until 1954. That year, thanks to the fund-raising efforts of the Business and Professional Women's Club of Covington and the Covington Chamber of Commerce, it was restored and preserved as part of Alleghany County's history.

It can be reached from I-64 by taking exit 10 to Route 60 and traveling one-half mile east, or by taking Route 60 west from Covington.

To see bridges from all over the world, see none other than Louis La Vache!
Posted by Tanya Breese at 9:15 AM