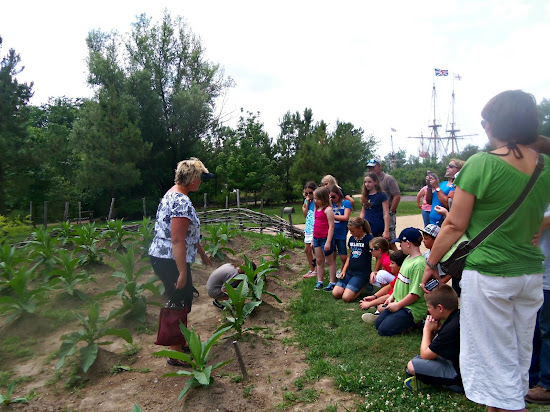 A student checking the tobacco plant for worms. This had to be done twice a day and every leaf gone over.

JOHN ROLFE thought that Virginia might be an outstanding site for tobacco growth. Early attempts to sell Virginian tobacco had fallen short of expectations. Smokers felt that the tobacco of the Caribbean was much less harsh than Virginian tobacco.

Rolfe reacted to consumer demand by importing seed from the West Indies and cultivating the plant in the Jamestown colony. Those tobacco seeds became the seeds of a huge economic empire.

By 1630, over a million and a half pounds of tobacco were being exported from Jamestown every year.

The tobacco economy rapidly began to shape the society and development of the colony. Growing tobacco takes its toil on the soil. Because tobacco drained the soil of its nutrients, only about three successful growing seasons could occur on a plot of land. Then the land had to lie fallow for three years before the soil could be used again. This created a huge drive for new farmland.

Indentured servants became the first means to meet this need for labor. In return for free passage to Virginia, a laborer worked for four to five years in the fields before being granted freedom. The Crown rewarded planters with 50 acres of land for every inhabitant they brought to the New World.

Naturally, the colony began to expand. That expansion was soon challenged by the Native American confederacy formed and named after Powhatan.