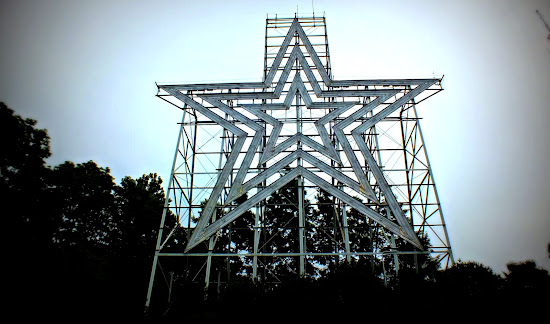 A rainy summer day at the Mill Mountain Star.

Now some random facts about the star:

1) The star was built in 1949 to kick off the Christmas season shopping.

2) Initially the star was illuminated in all white but would later change to red to indicate a traffic fatality for that day.

4) On April 17, 2007, the star had to be turned off because one of the power lines had been heavily damaged by a tree. When the star was relit on April 22, 2007, officials changed the color configuration to all-white "as a symbol of hope" after the Virginia Tech massacre.

5) See the view from the Star Cam HERE

Now it's your turn! Post 5 random things, link up to Willy Nilly and visit other participants!! Have a great weekend :)