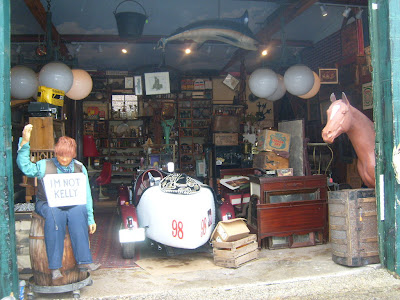 So here's the inside of Kelly's Real Deal Antiques store. That's not all, it goes way over to the left and over to the right, and I don't think there's an inch of space not occupied with something you can buy!

That mannequin, and there's another that you can't see that is sitting on the horse, freaked the boys out though,lol...they are pretty creepy looking!

The boys found a toy kind of pirate gun that they want to go back today and buy with their money they've saved. It's heavy, made of wood and metal, that shoots those rolls of paper caps, and made in the USA! (remember those?) not the cheap plastic junk we get from China that breaks in a day and gives our kids lead poisoning! Grrr!

Speaking of those paper caps, our neighbor told us (whose mother in law used to own the house at one point 1940's-90's)t he old original barn that was built at the same time as our house sat on the hill. My neighbor's little cousin was out in the barn one day, years back, hitting the caps with a rock when a spark caught the barn on fire and it burnt down. Our neighbor told us this story one night a few months back and a weird thing happened that night. We were all sleeping when Nick and I were awakened by the sound of a child running down the stairs out in the back, which run near our bedroom window, yelling "fire". We jumped up out of bed because we both heard it and ran to check on the kids and they were all sound asleep. Neither of us could figure out what it was but we both thought we heard a kid yell "fire" as they ran down those stairs. I told him it must have been Daisy barking and he asked me "when did she start talking like a human"? lol...I can still hear it plain as day, so weird!

Christian, Braden and Dalton were supposed to have baseball practices today, but they have been cancelled because of the rain. It will be a good day to hide inside. Have a great weekend!
Posted by Tanya Breese at 8:36 AM