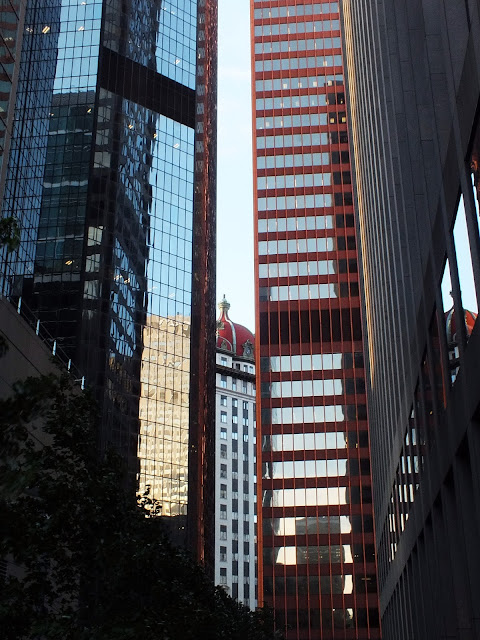 Downtown Pittsburgh....I liked that little red Russian-esque dome. Tried to find a name for the building but couldn't. If anyone knows, please fill me in!

To see more facades from all over the world, visit City Daily Photo

UPDATE! Thanks to the nice folks at

Visit Pittsburgh and Virginia blogger RevRunner I have learned that the red domed building is the Keenan Building located at 643 Liberty Avenue.
Found a little more information on the building:

"The 18 story Keennan Building was built in 1907 for Col. Thomas J. Keenan, owner and publisher of the Penny Press, later the Pittsburgh Press. The penthouse with its onion domes was personal apartment of Col. Keenan. When the building was completed in 1907, it was the tallest building in the city. Today it is mostly HUD low income housing and renamed Mid_Town Tower. From some reports I've read, it is a pretty grim place to live today with many of the social ills that the city has to offer, drugs, petty crime, prostitution... not to mention insect infestations in some of the apartments. All this just a few blocks from the swanky Duquesne Club, you gotta love the contrast. Still it is a cool building to look at (despite some 1960's "modernization") with its neo-classical beaux arts ornamentation. Col. Keenan's Penthouse is no longer in use."

which I found HERE
Posted by Tanya Breese at 9:31 AM