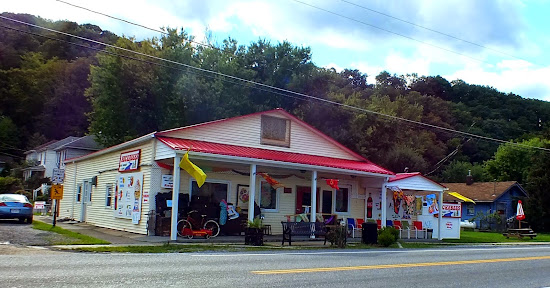 This is Huckabees in Iron Gate. We have never stopped here but the colorful chairs out front always catch my eye when we are driving through. I just looked at their Facebook Page and wow, I really need to make a point to check it out on the inside one day because what is better than "6 unique shops under 1 roof" and "a great place to stop, shop, and eat"! Well that sounds like my kind of place! You've got to check out their menu and the names of their deli sandwiches like the "oinker" lol..how funny! This is just right up the road from yesterday's park :)

1) I tried a few new recipes this week and these 2 things were winners... Tabbouleh (made with Quinoa and was soooo tasty!) and Roasted Chicken & Potatoes ...I used bone in breasts and the chicken was so flavorful!

2) It's a pet peeve of mine when people spell "y'all" like this "ya'll"...y'all is a contraction of you and all and when you drop the "ou" your apostrophe should hang right there, after the "y" and before the "all"...so there, my spelling tip of the day ;) but...I have probably made tons of grammatical errors all through this post so who am I to judge lol...

3) Have you heard of this: Worldwide Photo Walk? Looks pretty cool. Nothing in my area, but I did see a couple in DC.

4) Did I tell you Ash and I went and saw The Giver? I know I mentioned we were going to go but I don't think I told you that we REALLY liked it...a lot! Dalton read the book and Braden's class just started. I know someone who didn't like it but she read the book and you know how that goes, books are always better, in most cases I guess...

5) Ash saw some religious nut on campus this week. He was there with his wife and small child. He staked out a section and started "preaching" about cheerleaders being "whore-leaders" and sorority girls being "sow-ority girls" and basically calling everyone big ol sluts. I don't know why he is allowed to do this. She said he has permission because it's his "Freedom of Speech"..his wife stands by and films the whole thing. Ash had heard that he sued another school he was "preaching" to after he ended up in a fight, someone punched him and now his wife films it for evidence I guess. Sounds to me like he wants to instigate stuff and then sue..maybe that's how he makes a living. He sounds dangerous. Ash sent me a link about his visit there, someone recorded him and a student got a guitar and started to sing "How He Loves Us" and all the students joined in and covered the preachers mean ramblings. You can watch it RIGHT HERE ....it's pretty touching!

Well that's my 5 for the week and now it's your turn! Post 5 random "willy nilly" things and link back to me. Visit other Willy Nilly participants and have fun! Have a great weekend too!!