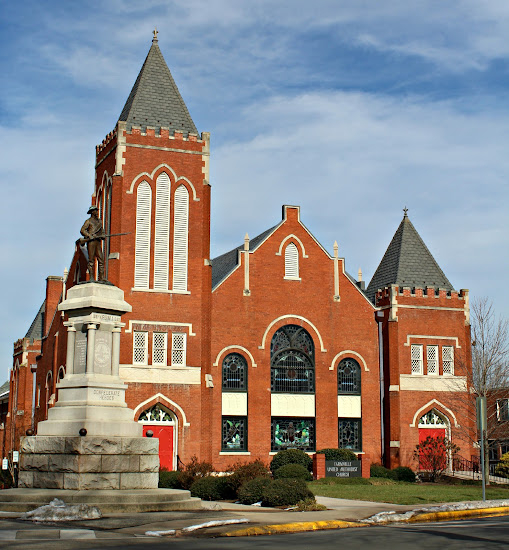 "A group began meeting in a building on this site in 1832. In 1833, the property
was conveyed for use by the Methodist Episcopal Church. The first church
building was a small wooden structure. A brick church was built in 1839. Upon
finding out that 400 pounds of beeswax were needed to make the mold for the
medallion for the ceiling of the new church, Mrs. Pleasant Hubbard, a member of
the congregation, personally traveled throughout the county and collected the
needed beeswax. Encased in glass, this medallion is still on display in the church.
In 1907, when the congregation grew too large for the church, it was torn down.
The present brick building was completed in May 1908 and enlarged in 1953 and
again in 1963. The stained glass windows are memorials to deceased members."
(Copied from the Farmville walking tour) 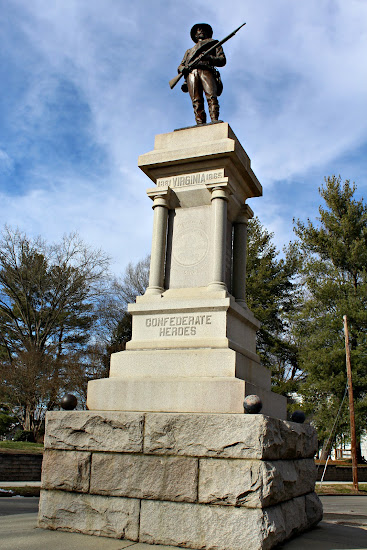 "Plans to build a monument to honor Confederate heroes of the Civil War were
started by the Prince Edward Memorial Association at a meeting in the Old Opera
House in August 1895. This organization preceded the formation of the Farmville
Chapter of the United Daughters of the Confederacy and consisted of Confederate
Veterans and local county persons. The UDC Chapter formed in 1896 and took
the lead in raising $3,000 to erect the monument, a large undertaking when land
cost $2.50 an acre and an adequate size home cost only $1,500. The monument,
designed and erected by Petersburg Marble Works, is made of Virginia gray
granite, 19 feet in height. The bronze figure of the Confederate solider was cast by
Gorham & Co. and is seven feet tall. The monument was dedicated on Oct. 11,
1990. The speaker was Farmville native, Professor William T. Thornton, Dean of
Engineering at the University of Virginia, where the engineering building is
named in his honor."
(Copied from the Farmville walking tour) 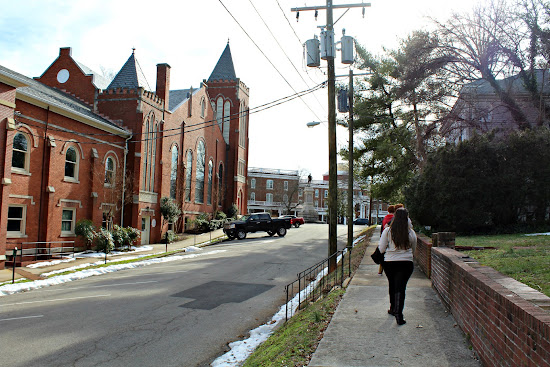 A view from the side of the church. You can see the monument and Longwood University straight ahead.

Linking with Mersad's Through My Lens