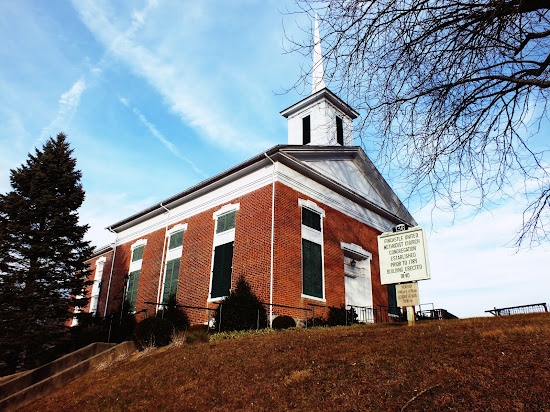 "Our church has a rich heritage beginning with the organization of the congregation in 1790 by Francis Asbury, "the prophet of the long road", who was also responsible for drawing the plans for the first Fincastle Methodist Church in 1802. The original building, very similar to the present structure, was erected shortly after the land was purchased from Patrick Lockhart and his wife for 12 pounds on July 12, 1803. The deed is recorded at the courthouse in Fincastle. The original building was eventually condemned, torn down with the aid of oxen teams, and replaced by the present structure in 1840 following a great revival conducted by William Craft. Several features of the church building remind us daily of our heritage. The balcony gallery was built for slaves and servants and was entered by a separate door. The church pews are divided in the center, reminiscent of a time when men and women were prohibited from sitting side by side to avoid distractions. The four chairs behind the pulpit were crafted in Fincastle by David Spangler, and the two black chairs were kept on each side of the "Amen Corner" (to the right of the minister) and were used by the oldest couple in the church. The bell in the belfry, still in use, was cast by the Hadley Company in 1811. The original chandelier was broken when the church ceiling fell in 1941, and was replaced in 1973 by the present chandelier obtained from a small Methodist Church near Blacksburg, VA. The bracket light at the back of the church is original, and the side lights were copied from the original and installed in 1974. The education wing was added in 1954. The two doors at the front of the sanctuary were originally windows. Prior to the addition, classes were held in different sections of the sanctuary and the basement. In 1991, the church acquired the property across the street, known as the "Hedrick House" from the longtime residents who were faithful members of the church. By the late 1990's the church realized the need for greater diversity in its facility so it undertook a study for a multi-functional building to be constructed on the site of the old Hedrick House. The results along with a capitol outlay funding program is the Family Life Center completed in 2002. This facility includes a fellowship hall/gym, church offices, Conference Room, Sunday School classrooms and Prayer Room. This has added a new dimension to the church's Christ centered mission. The Fincastle United Methodist Church is blessed to be in its third century of ministry. From the circuit riders to the cyber surfers, however, our mission remains the same."

You can visit UMC HERE

The snow we received on Friday is almost gone. We got a couple of inches. It was so powdery that the boys didn't even go out and play in it. It was pretty though! Tonight's weather is calling for freezing rain/sleet. Those boys may end up with a delay in the morning lol. Then expecting to warm back up into the 60's on Tuesday. So ready for that!

My social media button dilemma was easily solved. I didn't get those cute bottle top ones because they were older and didn't include Pinterest, which I love and had to have. But I did find this site Nifty Buttons which was easy peasy to use. You just pick the buttons you want and enter your url's and Nifty Buttons figures out the code then you just copy/paste into your blog. That's the way I like to do things, EASY!

Linking up with Madge and Weekly Top Shot. I'm a day early. Usually don't blog on Sunday but I've been up for a couple of hours with nothing to do!