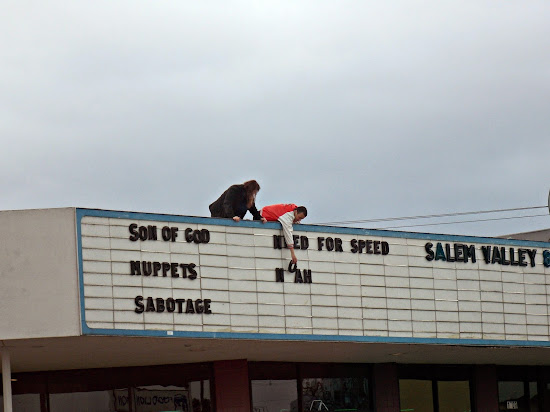 Sunday we were supposed to go to the Nascar race in Martinsville. The weather was sketchy calling for rain and SNOW! We had 2 tickets already but needed to purchase 4 more. It was going to be a gamble not knowing how the weather would turn out and if the race would be cancelled due to rain so we decided to just give the 2 tickets to Ashlyn and her boyfriend and we went to the movies instead. We went and saw Noah. The boys and I thought it was pretty good, my husband said it was alright. I'm much easier entertained though I guess haha...anyways, we pulled up and noticed these workers hanging the O on Noah. Seems a little scary. The person who hung "Sabotage" must have had extraordinarily long arms!