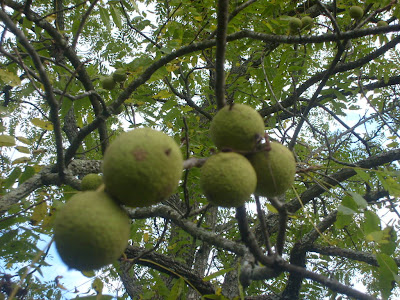 I have several Black Walnut Trees around my yard. You have to be careful this time of year because they drop from the trees and you don't want to be under the tree when they drop. I was outside the other day and it was a bit breezy and walnuts were flying right out of the trees, in all directions. Honestly, one of these could do serious damage if you happen to get beaned in the head, ouch!

I have no idea what to do with these walnuts in this form. When we lived in Missouri, people would fill their truck beds with the walnuts they've gathered and go sell them. I remember the first time we saw this, we were driving past some sort of weigh station they had set up one weekend. Trucks were everywhere, filled to the brim with these green things that we had no idea what they were. So, we stopped and asked what was going on. One local must have thought we were ignorant "furriners" (a Missouri term for people who aren't from there. Example: "you ain't from around here are ya? You must be some sort of furriner.") lol, because he told us they were walnuts of course, but then preceeded to explain to us what walnuts are and what people use them for,lol. We thanked him for his plethora of information and drove off knowing more than we ever knew about walnuts!

Anyone want some walnuts? I've got plenty!
Posted by Tanya Breese at 3:01 AM