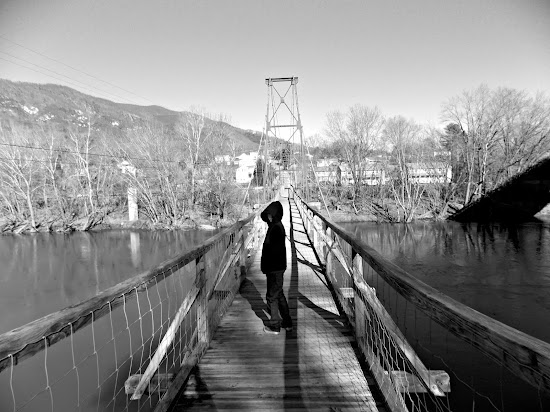 
After picking up Christian's girlfriend in Buchanan on Friday I wanted to walk around a bit and snap some pictures with my new camera. The boys wanted to cross the bridge. So we did. Ashlyn's boyfriend carved their initials somewhere on it a while back. We tried to find them but couldn't. It was cold. We were walking fast.

Here's some history on the bridge:

"The Buchanan Swinging Bridge is 366 feet long, 57.5 feet tall, the only one of its type to cross the James River and owned by VDOT. In 1999 the Swinging Bridge was recognized as a National Register Historic Landmark as part of the Town of Buchanan National Register Historic District.
Portions of the large stone piers were constructed in 1851 for the Buchanan Turnpike Company's Toll Bridge. Toll for every person was five cents with an additional five cents for each horse, mule or oxen and five cents for each wagon.

On June 13, 1864 the covered bridge was burned by Confederate General McCausland in an effort to prevent Federal troops from crossing the James River on their way to Lynchburg. The bridge was rebuilt but washed away in a flood of 1877. At this time, the R&A Railroad Company rebuilt a toll free covered bridge. In 1897 this wood covered bridge was replaced with a steel bridge that remained in use until 1938.

In July of 1937 construction of the current concrete James River Bridge was started with an agreement to maintain pedestrian access. On July 4, 1938, the bridge was dedicated. The bridge is adjacent to many shops & restaurants in downtown Buchanan."
FOUND HERE

Took the boys back to Buchanan yesterday to see EPIC at the old Buchanan Theatre. I've shown you a picture HERE. It's my favorite place to catch a movie! Oh, and EPIC was so cute so I rented it for today and invited Ashlyn and her boyfriend over for lunch and a movie. You should watch it!

Hope you all have a very happy New Year and be safe if you are headed out tonight to celebrate!

I'm adding a photo here that Sunnybrook Farm sent me of the Buchanan Bridge back in the day:

How cool is that?!! Thank you Sunnybrook!!