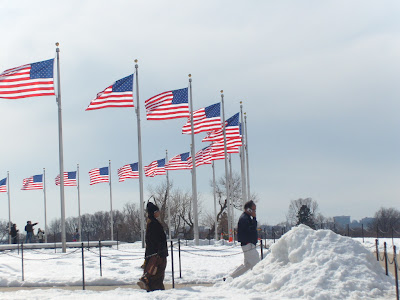 Amercian flags around the Washington Monument against a colorless winter sky! To see more skies from all over the world, visit Skyley!
Posted by Tanya Breese at 12:00 AM 9 comments: 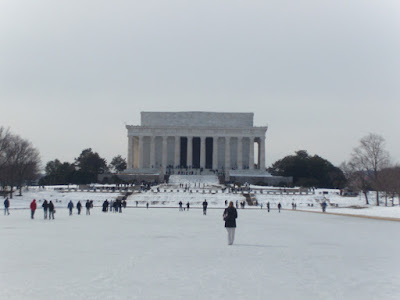 On Saturday we took a little drive up to DC for the day. As you can see, they still have a lot of the snow from that big storm that blew through recently. This is the reflecting pool in front of the memorial and it is a block of ice, notice everyone walking on it? We were walking on it too until a police officer yelled for everyone to get off the ice. He kept quite busy trying to keep people off it, it was pretty much a losing battle lol.
Posted by Tanya Breese at 12:00 AM 12 comments: 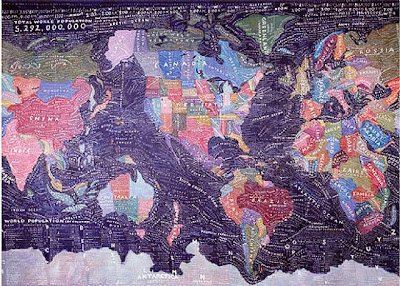 Hello, I'm back! I know, I've been on a blogging hiatus, waiting for that new camera, which by the way, I think I finally found one that I will love and it should be here sometime today! I have missed my friends from all over the world!

I am starting back with a post about an artist that I want to introduce to you, Paula Scher. I have included a piece of her work, pictured at the top of this post. This one in particular is titled The World, dated 2006. I love the colors she uses and her style is reminiscent of a patchwork quilt! Isn't it a fun piece?

Paula Scher's maps have become very popular amongst fine art print collectors and you can see some of her newest work at a new exhibit at Stendhal Gallery which is titled "Paula Scher: Maps Screenprints 2006-2010" and will run from February 4 - March 27.

Ms. Scher's limited edition screenprints are created with the highest quality printing techniques, these screenprints will last over 500 years and can be passed down and shared from generation to generation as highly collectible works of art.

These prints are made in collaboration with Andy Warhol's master printer Alexander Heinrici and printed on Deluxe Lana Quarelle paper, hand-made in the Vosges region of France. Each Limited Edition Screenprint is inspected, signed, numbered and dated by the artist, and is accompanied by a certificate of authenticity.

Paula Scher has recently been commissioned by the "Percent For Art Program" for the New York City Department of Cultural Affairs to paint 2 murals at the Metropolitan High School in Queens. The murals will be installed for the opening of the school year in the fall of 2010.

Paula Scher is a partner at Pentagram Design, Inc., where she has created identities for companies from the New York Public Theater to Citibank, among many others. Scher’s work has been exhibited in the world’s leading museums including the permanent collections of the Museum of Modern Art and the Cooper-Hewitt National Design Museum in New York, the Library of Congress in Washington, D.C., the Denver Art Museum, the Museum für Gestaltung Zürich, and the Bibliothèque Nationale de France and the Centre Georges Pompidou in Paris.

For more information on Paula Scher and her beautiful prints, please visit Stendhal Gallery .
Posted by Tanya Breese at 12:00 AM 8 comments: