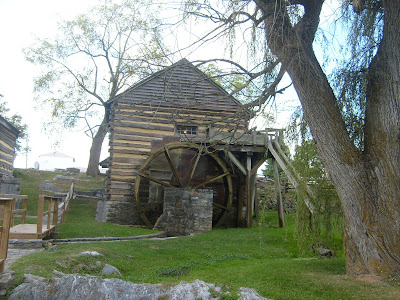 This old mill is located in Rockbridge County, VA . It sits on the McCormick Family Homestead. Cyrus McCormick was born there in 1809 and later invented the Reaper. The old family home sits on the homestead as well as the mill, pictured, and a black smith shop.

The McCormick heirs deeded the 634-acre farm to Virginia Tech to use for agricultural research and education. You can read more about that HERE


This morning after dropping Ashlyn off at school, I got a speeding ticket. Not an ordinary speeding ticket but a speeding ticket in a school zone. I am such a stickler about not speeding in school zones, I mean that is the ONE spot that I never speed in and hate to see people disregarding the speed limit. Well, I dropped Ashlyn off, crossed my side of the road and pulled out waiting to make a left turn. I was thinking to myself how empty the road was, no traffic at all, when I pulled out, accelerated up to speed and then it hit me, I'm still in the school zone, proceeded to slow down but the damage was done, I was caught on radar. I was doing the speed limit for normal times of the day but was over the 25 school zone speed. Well, I knew I was wrong, was hugely embarrassed and pulled over. The Botetourt sherrif got out of his vehicle and walked towards mine. I rolled my window down, quickly apologizing for what I did. This man was so incredibly rude, I couldn't believe it. I continued apologizing and was extremely polite (not to get out of a ticket, but because I knew I was in the wrong, albeit accidentally, but still wrong). This did not matter to this Botetourt Barney Fife. He continued to talk in a rude manner towards me as if I was a common criminal and not a mom in a mini van.I graciously took my ticket and went on with my day.

The thing about this whole ordeal that makes me angry is that people in this position should use their "power" in a positive way, rather than to treat each person they run across as if they did some horrible deed. I admit, I was wrong, but I didn't intentionally speed, it was an accident. No complaints about the ticket, but come on Botetourt, don't you want your officers to be setting a good example in the community? When I mentioned this person's horrible attitude to a police officer that I know, his response was "yes, I've heard that quite a few times." Nice. Treat people with respect, and you will be respected.

Off my soap box now and very careful to not speed again!
Posted by Tanya Breese at 2:49 PM