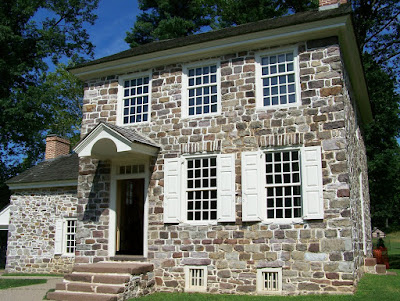 This small house is believed to have been constructed in 1773 for Isaac Potts, operator of the family grist mill. Although some sources place the construction date as early as 1759. In 1777-8 the property was owned by Isaac but rented to his aunt, the widow Deborah Hewes, who sublet it to Washington. The General's wife Martha lived here with him during the later months of the encampment and the administrative business of the army was transacted on the first floor.
Posted by Tanya Breese at 8:20 AM