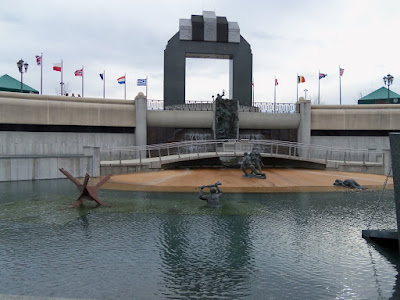 On Sunday we visited the National D-Day Memorial in Bedford. Bedford was chosen as the location for the memorial because
Bedford provided a company of soldiers (Company A) to the 29th Infantry Division when the National Guard's 116th Infantry Regiment was activated on 3 February 1941. Some thirty Bedford soldiers were still in that company on D-Day; several more from Bedford were in other D-Day companies, including one who, two years earlier, had been reassigned from the 116th Infantry to the First Infantry Division. Thus he had already landed in both Northern Africa and Sicily before coming ashore on D-Day at Omaha Beach with the Big Red One. Company A of the 116th Infantry assaulted Omaha Beach as part of the First Division's Task Force O.

By day's end, nineteen of the company's Bedford soldiers were dead. Two more Bedford soldiers died later in the Normandy campaign, as did yet another two assigned to other 116th Infantry companies. Bedford's population in 1944 was about 3,200. Proportionally this community suffered the nation's severest D-Day losses. Recognizing Bedford as emblematic of all communities, large and small, whose citizen-soldiers served on D-Day, Congress warranted the establishment of the National D-Day Memorial here.

Linking to Watery Wednesday
Posted by Tanya Breese at 6:47 AM