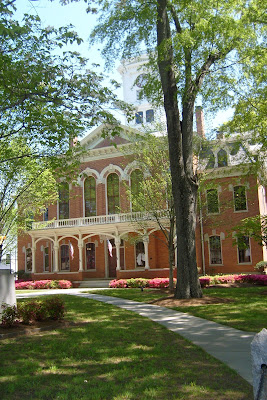 Back side...there is a nice little shaded pavillion to sit and relax from a hot summers day! 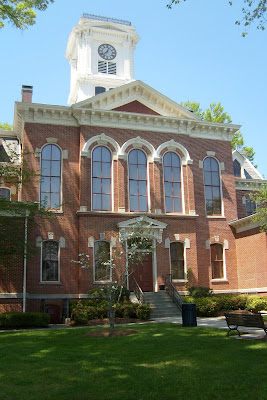 I've found myself following the City Daily Photo blogs and enjoy them so much that I wanted to join in the fun and learn about the town and county I live in!

I am starting with the Walton County Courthouse. It is one of my favorite buildings in Monroe (or even Walton County for that matter!) and just seems like a good place to start since it's the hub of Monroe's beautiful downtown historic district.

Other Information: Shortly after Walton County was created in Dec. 1818, court was held in a cow barn. Other buildings served as seat of government until the county's first courthouse was completed in 1823. That building served until 1845, when another courthouse was built. Walton County's third -- and current -- courthouse was completed in 1884. The clock tower was added in 1910, and the building underwent major restorations in 1933 and 1996. The 1996 renovation left the building's exterior in pristine condition. Additionally, the large courtroom on the second floor was restored, and the purpose of the courthouse was changed from a general-purpose county government building to a facility for holding superior court trials. As a result, county judicial and administrative officials and departments are housed in a number of courthouse annexes situated immediately across the streets to the north, west, and south of the courthouse square, while the Walton County commission has its own building at the rear of the courthouse.

Historical information copied from: Carl Vinson Institute of Government, The University of Georgia

For the county courthouse historical marker: