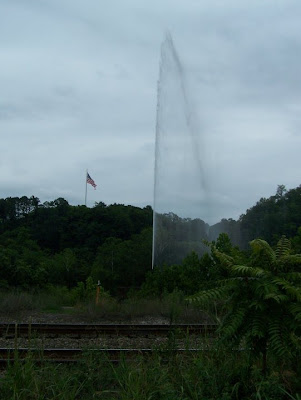 Here, about 250 years ago, in the spring of 1757, John Lynch established Lynch’s Ferry. One of the city’s newest attractions now stands, or spouts, in the river at the exact spot where the founder’s ferry crossed the James River centuries ago. The three-year old jet d’eau, donated by a public-spirited citizen as a focus for riverfront renewal, was dedicated on August 20, 2004, and immediately became a major Lynchburg landmark, or watermark. Attached to a 19th -century stone pier that once supported a bridge across the James, and throwing a column of James River water 190' high, it is the highest such fountain east of the Mississippi. Critics have likened the water spout to a broken fire hydrant, which has a ring of truth when it is seen directly from the riverside. From a distance, however, and from other vantages points throughout downtown, the spray that rises above some of downtown’s tallest buildings adds a gossamer effect to the cityscape.

Click here to view thumbnails for all participants
Posted by Tanya Breese at 12:00 AM