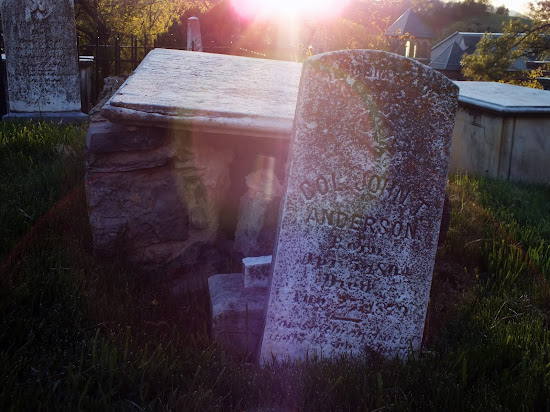 Found this info on the Col:
Notes for John Thomas Anderson:
"Journal of the Roanoke Historical Society"

Lived and died in Botetourt County. He, his wife and only son are all buried in the Presbyterian cemetery near those of his parents and his four grandparents, Robert and Margaret Neely Anderson, Francis and Grace Metcalfe Thomas.

Represented his county in the Virginia House of Delegates and in the State Constitutional Convention of 1849-50.

He was a lawyer and practice for 22 years in Fincastle. Was involved in the beginnings of Fincastle Academy and the Presbyterian church.

Appointed by President Andrew Jackson to the board of the United States Military Academy.

He retired from his law business and was involved in getting iron down to his brother Joseph Reid Anderson at Tredegar Iron Works in Richmond, VA.

Their home "Mt. Joy" was destroyed by the Union General Hunter and they lived in the brick servant's house and kitchen after the mansion was burned.

He had six boys before he passed away.

**A little confused here. It says he and his wife are buried with their only son...then notes he had 6 boys before passing.
Found HERE

You can read some more interesting info HERE along with more links.

Linking with Taphophile Tragics although I don't know if this meme is still going on anymore....seems every time I find a new interesting meme to play along with, it drops off lol...this will be my last week to try and link with it if it doesn't link up today.