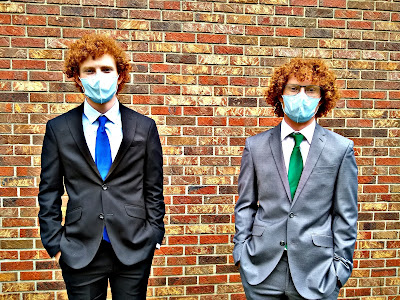 Well hello blog world...I just haven't been in much of a blogging mood lately...we are all hanging in there but schedules are upside down right now...I know most of you feel that too...I am thankful to still have a job to go to as it gives me a little break from all this craziness.

Easter my older 2 came over for the day and it was so nice having the 6 of us together! We ate...drank a little (those of us who are old enough haha) and laughed a lot...it was a great day!

Braden and Dalton had put their suits on because they were taking some fun pictures with Christian, their older brother...when I saw them dressed up I told them to stick masks on because I wanted a picture of that, which they thought was a stupid idea but gave in to me, the good guys that they are!

I thought this was a good representation of this year...sadly...

We ordered their suits early for prom, which was to be next month... Dalton's girlfriend's prom was supposed to be last month...I imagine later when it is safe the schools will plan something for them...I heard that graduation is being held later in June.... school gets out next month.

FYI: Braden is standing on a bit of a hill....their heights are not that different!

Hope you are all doing well!

Linking with Tom's Tuesday's Treasures and Our World Tuesday