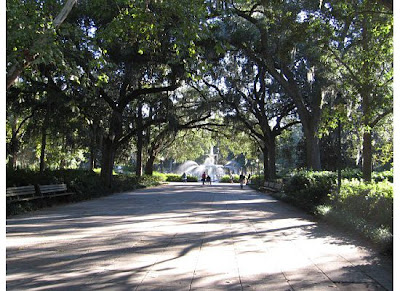 Don't you just love the way the big oak trees make a tunnel like walk way? If you look closely at the trees, you can see Spanish Moss hanging from the branches.
The Forsyth Park Fountain is at the end of the walkway and this information is taken from Savannah's City website:

The Fountain is a large, ornate, two-tiered cast-iron fountain surmounted by a classically robed female figure standing in extreme contrapposto, holding a rod. Water comes from this rod into the top basin. The top basin appears to be made of three successive rows of closely arranged flat leaves, around the base of which are arranged acanthus leaves. The pedestal which supports this top basin is surrounded by grasses, including cattails, and a wading bird with wings outspread. This pedestal and basin stand in another, larger octagonal pedestal and basin, into which the water overflows. It is more geometric and architectural than the top basin and pedestal, but it is also ornamented with leaves, in low relief. An ornamented drop pendant is just below the intersection of each side. There is also a hole in the bolection molding around the basin, located at the intersection of each side. A waterpipe protrudes from this hole. In addition, there is a similar hole located in the middle of the molding of each side. These sixteen pipes are the water outlets for this lower basin. The octagonal pedestal is ornamented with a cartouche on each of its sides. Another cartouche composes each of the eight vertical sides of the pedestal where it spreads out to support the basin. The vertical part of the pedestal is set off, top and bottom, by a molding. The lower pedestal and basin have been treated artistically as if they were a classical or Egyptian column in its divisions, ornamentation, etc. At the base of the pedestal, jutting out from every other octagonal side, are four blocks on which stood originally, four tritons (half man and half sea serpent) each with his left hand on his waist and his right hand holding a shell-horn, through which water is spouted in an arc. These tritons were moved a few feet out beyond the basin into the large pool in which the fountain stands, ahd have been replaced by four urns, which are not part of the water flow. Four spouting swans were also added to the pool; they are located farthest out, equidistant from one another, around the pool, which is surrounded by a stone or cast stone coping. The pool is surrounded by an ornamental wrought-iron fence just tall enough to keep children away from the pool and the fountain. Inside the fence is a paving of "signature bricks" which are engraved with the names of those who contributed to the fountain restoration in 1988. There is a brick walkway around the perimeter of the fence.

Forsyth Place was the first large park created in Savannah. Stylistically, the park was influenced by the urban renewal of Paris in the nineteenth century, when broad boulevards and parks were created. This greatly influenced city planning throughout the industrial world--every large city in the United States was developing large city parks beginning in the 1850's. Culturally speaking, it is not insignificant that the Forsyth Park fountain was thought to be a copy of the one in the Place de la Concorde, by Hittorff, who completed two monumental fountains in that square only a few short years before Forsyth Place was created. Bull Street was thought of as a boulevard and promenade (both French terms) and the fountain served as a focal point of a long vista, all the way from the Exchange, which was City Hall. In an economic context, the park and the fountain would not have been possible if Savannah were not experiencing economic prosperity. The 1850's were the first consistently prosperous period throughout the South, which admired and emulated the high style of the French Empire.

During its installation in 1858, the pool was enlarged and the fixtures re-arranged to deal with the high water pressure which caused the water to gush too vigorously. The fountain was supplied with fresh water and ran only in the afternoons. In 1860, brick paving was added around the fountain, the fountain was painted the first of many times and the first of many repairs was made. In 1868, new balls and implements were put in.

In 1960-61, the fountain was renovatd by Mr. Carsten Tiedeman in memory of his father, Judge G. W. Tiedeman, and a plaque was installed in commemoration. In 1973, vandals smashed three of the tritons, which were reported to be made of "pot metal" not cast iron. New tritons of silicone bronze were cast in 1974 by Tony Gilkes, an employee of Bailey's Forge of Savannah. One of the urns was knocked off in 1974, and several of the ornamental gloves on the light poles around the pool were smashed.

In early 1977, the figure on the fountain collapsed during an ice storm, and was reconstituted with fiberglass and resin so that it was no longer hollow. In late 1977, the Rotary Club paid for underwater lighting in the pool of the fountain. The incandescent lighting system was replaced in 2007 with a fiber optic system illuminated by metal halide lights. This system uses 1/10th of the power required by incandescent lights.

In 1988 the fountain was completely restored by Robinson Iron Works of Alexander City, Alabama, financed about half and half by the City and by private donations, much of which came from the sale of "signature bricks". In 1989, the Georgia Trust for Historic Preservation gave the Park & Tree Commission and the Signature of Savannah Committee an award for an "Outstanding Restoration".
Posted by Tanya Breese at 12:00 AM