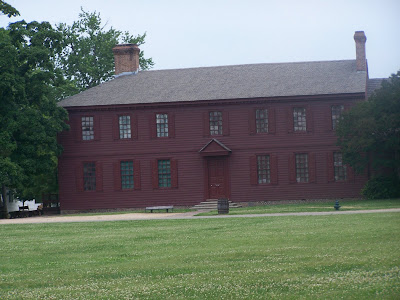 A couple of weeks ago, over the Memorial Day weekend, we went to Colonial Williamsburg. I loved it! This is a picture of the Peyton Randolph House:

The original structure of the Peyton Randolph House was built in 1715. Colonial Williamsburg's primary restoration of the home began in October 1938 and was completed in April 1940. More restoration of the main section was undertaken in June 1967 and was finished 12 months later. The center and west portions of the house opened for exhibition on July 1, 1968.

We had so much fun on this tour, all of us! Nick does not believe in ghosts, Ashlyn hates to be scared and the boys and myself love ghost stories. This tour was perfect for all of us! Our tour guide Tom did a great job telling us "ghostly" stories of the city, based on the book "The Ghosts of Williamsburg" by L.B. Taylor.

We started our tour at The College of William and Mary and finished across town, stopping at many sites along the way for Tom to tell another story.

In this photo is the Peyton Randolph House which is rumored to be the most haunted house in Williamsburg, housing up to 23 ghosts. I tried to get photos on the tour but all my pictures turned out pitch black, so I had to take a quick pic the next day as we were walking past it. We had planned to tour the house on Sunday, but then on Sunday we noticed it was closed so we'll have to put that on our "to do" list for the next trip to Williamsburg.

I highly recommend the ghost tour we took. The stories Tom told us were a great addition to the stories we heard on the individual tours we took through Williamsburg. One thing I will mention is that if you are wanting to take pictures on the ghost tour, ask your tour guide ahead of time if they will allow a few minutes in front of each stop. I assumed that there would be plenty of time for taking pictures but at each stop we would gather in a close circle to hear Tom's story, and then quickly move on to the next location. If you wanted to hear the story, you could not move away from the the group for pictures and we didn't linger long enough to snap any after the story, plus, with it being so dark outside and several other tours going on, you needed to stay with your group as they moved on. I tried on a couple of occasions to take a few quick pictures as the group was leaving but found myself lost trying to find my group! so my advice is to just ask if there will be an opportunity to take pictures, I'm sure they will accommodate you as everyone was so nice and helpful, from getting tickets to the tour guide.

So all in all, a great time was had in Williamsburg and I'll have more pictures from our trip all week!