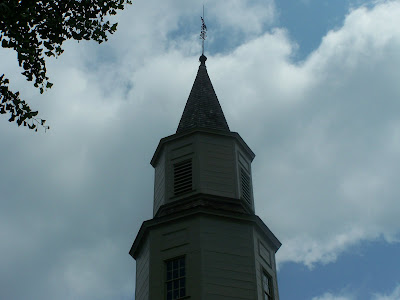 Among the men of the Revolution who attended Bruton Parish Church were Thomas Jefferson, George Washington, Richard Henry Lee, George Wythe, Patrick Henry, and George Mason. But the building's history, and that of its churchyard, goes back further in time.

Dating from 1715, the present structure is the third in a series of Anglican houses of worship that began in 1660. The first, which may or may not have been at or near the 18th-century site, was built, probably of wood, in the Old Fields at Middle Plantation, Williamsburg's name until the 66-year-old community was incorporated in 1699.

Formed from Middletown and Marston Parishes in 1674, Bruton Parish was about 10 miles square. It is named for Bruton, Somersetshire, in England, the home of then-Governor William Berkeley and Virginia secretary Thomas Ludwell. As late as 1724, the parish contained only 110 families.

In 1677, the vestry ordered that a church be built of brick on land donated by John Page November 14 of that year. Page also donated £200. The contract was let in June 1681 and the building, which stood a few steps northwest of the 1715 church, was complete by November 29, 1683. Its buried foundations remain. The first rector, the Reverend Rowland Jones, dedicated the structure on January 6, 1684.

The church stood near the center of Williamsburg's original survey map drawn 15 years later. Its location suggested the church's importance to the colonial community's life, but the building was already in disrepair. On November 21, 1710, the vestry declared its condition ruinous and proposed construction of a third church. The vestry submitted a plan for one large enough to meet only the needs of parish residents and invited the colony's government to finance an enlargement to accommodate its officers and others who came to the capital when the General Assembly sat.

The Reverend James Blair, president of the College of William and Mary and Virginia's highest-ranking clergyman, approved construction on March 1, 1711. The same day, Governor Alexander Spotswood provided an architectural drawing of a cruciform design 75 feet long and 28 feet wide "in the clear," with two wings 22 feet wide and 19 feet long. Spotswood offered to underwrite 22 feet of the length and provide some or all of the bricks if the vestry would finance 53 feet and the assembly paid for the wings. His proposition was accepted. The contract was let to carpenter James Morris on November 17, 1711, the wings to be raised by John Tyler, builder of the Magazine.

Governor Spotswood was provided with a canopied chair on a platform inside the rail opposite the raised pulpit with its overhanging sounding board. Parishioners sat in boxed pews, their walls providing privacy and protection from drafts. In the early years the sexes sat apart. A vestry book entry for January 9, 1716, says:

"Ordered that the Men sitt on the North side of the church, and the women on the left."

A succession of galleries was built for particular groups beneath the soaring ceiling. For example, on July 10, 1718, William and Mary students were assigned a gallery that still stands. Exterior stairs were added for access to some of these railed, overhanging rows of benches. In 1744, the building was enlarged, and in 1752 the vestry voted to make the east end as long as the west, extending the chancel 25 feet to the east. The assembly paid for the work, and it was completed in 1755.

The north, east, and south gables are pierced by rosette windows, the north and south walls by tall arched and sashed windows. All were provided for ventilation as well as light.

In 1758, the church received a chalice, paten, and alms basin from the old church at Jamestown.

Among the Williamsburg notables buried beneath the marble flagstones inside the church was Governor Francis Fauquier, one of the best loved of the colonial governors, who died in 1768.

The same year an English organ was installed. Gaolkeeper Peter Pelham was hired to play it for £25 a year, a position he held until about 1802. Pelham brought to church with him a prisoner from the Gaol, whose job it was to pump the instrument. The organ remained in service until 1835. The present organ, the church's fourth, was presented by John D. Rockefeller Jr. in 1954.

In 1761, merchant James Tarpley presented the church with a bell. Bids for a steeple or belfry to house the bell were let on January 1, 1769. The vestry awarded a £410 contract for a brick tower surmounted by a wooden octagon and for miscellaneous repairs to Benjamin Powell that September 14. The addition can be seen from outside the church, as the steeple bricks have a darker color than the salmon-hued bricks of the rest of the church. Tarpley's bell is still in use.

In 1781, the church served as a storehouse or hospital, perhaps both, during the Battle of Yorktown. In 1799, a visitor noted that the church again was "much out of repair." The exterior stairs were removed in 1834, and in 1838, the vestry agreed to major remodeling. Begun in 1839 and finished the next year, the renovations made a coal bin of the lower tower, walled off the west end for a Sunday school, relocated the pulpit against that wall, and opened a door in the east end. A town clock was installed in the steeple June 1, 1840.

For a week after the May 5, 1862, Battle of Williamsburg, the church served as a Union hospital for Northern and Confederate soldiers.

The vestry ordered extensive repairs and modifications in 1886 and 1896. By turns, the original pews were sawed shorter, then removed. Many of the marble floor slabs were removed in 1840 or in 1886, and a wooden floor was substituted. Some slabs were recovered when another restoration began in 1901 under the Reverend W. T. Roberts, but new ones had to be ordered for that restoration.

The Reverend Dr. W. A. R. Goodwin became rector in 1903 and took over the restoration. He raised funds to restore the church to close to its original form and obtained the services of New York architect J. Stewart Barney. Dedicated in 1907, the work cost $27,000.

Goodwin undertook another restoration in 1937 when the walls of the church were found to be in danger of collapse. Dr. Goodwin's health failed the next year, and Colonial Williamsburg helped the parish complete the restoration project.

Bruton Parish Church is owned by, and still serves, the three-centuries-old parish.


To see skies from all over the world, visit SKYLEY!
Posted by Tanya Breese at 9:00 AM