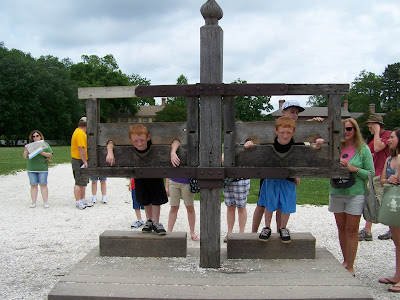 Pillory: The Pillory was wooden, and had holes for a person’s head and hands. It was common for onlookers to throw rotten fruit and/or rocks at the criminal, making the punishment even worse.

When people broke the law in colonial Virginia, the courts ordered swift and often public punishments. Unlike today, jails were used as places to hold people accused of crimes until they were brought to trial. They were not used as places for punishment. However, if the court imposed a fine, but the defendant could not pay, he sometimes spent time in jail until he did pay the fine in full.

What Kinds of Crime Were Punished?
Crime in colonial Virginia consisted of many of the same harmful acts still seen today such as murder, theft, and disturbing the peace. Certain crimes that are not considered that threatening today were taken very seriously in colonial times. For example, slander [saying something publicly that ruins someone's reputation], public drunkenness and hog theft were major crimes. Virginia’s agriculture-based economy meant that farm animals [stock] were highly valued. Treason [going against the government] was a serious crime because the king wanted to keep tight control of the colonies. Blasphemy [challenging accepted religious beliefs] was another crime that resulted in harsh punishment.

Courts awarded fines for many civil crimes [crimes between people such as stealing, breaking a promise, etc]. Fines were a way of avoiding the physical punishments. Some crimes that would be considered rather minor today resulted in serious punishments during colonial times. For example, if convicted of hog stealing, colonists were either fined ten pounds [English money] or lashed twenty-five times at the whipping post on their first offense. On top of the possible ten-pound fine, there was a fine of 400 pounds of tobacco to be shared by the owner of the stolen hog and the informant [person who told] of the crime. If a person was caught again, he/she would be locked in the Pillory with his/her ears nailed to the frame. When the thief was released, the nailed part of his/her ear was torn off. A third conviction was considered a felony and the criminal's case was then a matter of the higher General Court. Death was the usual punishment, whether the thief was a free person, a slave, or an indentured servant.

In many cases, a person's social status determined the harshness of his/her punishment. Those in a higher social class sometimes received a lesser punishment for the same crime as someone from the servant class. The law did not treat men and women equally. A woman could be whipped or publicly shamed for the same crime for which a man would only receive a fine. Slaves were always tried in the local courts and were given physical punishment whether it was the slave's first, second, or third conviction. When children committed minor crimes, their punishment was left to their parents or guardians. At age fourteen, young people had to appear in court. But if the court thought a child knew the difference between right and wrong, he/she could be tried in court for a serious offense as early as eight-years-old. The harshest punishment children received was a whipping. Slave children and orphans were most likely involved in criminal conviction because they often had no respected member of the community to speak for them in court.

Social crimes were sometimes treated severely, especially when these crimes involved breaking accepted ways of doing things or values of the community. For example, women who had an interracial illegitimate child were severely punished. A free woman was fined 16 pounds sterling [English money of high value] and, if she was unable to pay, she was sold into servitude for five years. If she was a servant, after her indenture time was completed, she was sold for another five-year term. The bi-racial child in question was bound out until the age of 31, without regard for the social standing of the mother. Marriage between a white person and an African American, mulatto, or Indian was prohibited on pain of banishment [sent away and not able to return] from the colony within three months.(Alcock)

Another example of ways the social norms of the community were regulated by the courts had to do with church attendance. Virginians were required to attend their parish church at least once per month. In Williamsburg the parish church was Bruton Parish Church, which was Anglican. Failure to obey this law without a reasonable excuse was punishable by a fine of 5 shillings [English coins], 50 pounds of tobacco, or a whipping of ten lashes. Non Anglican Protestants had to go to the county court to be legally declared a dissenter to avoid church fines. This excused them from church attendance, but not from their duty to pay the annual parish tax.

I wonder what kind of crime these 2 trouble makers committed? ;)
Posted by Tanya Breese at 9:09 AM