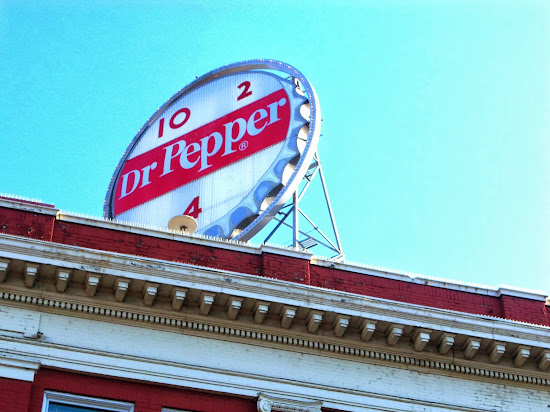 Found this interesting story about Dr. Pepper and the year 1957:
"According to the 1957 Gallup Poll, 53 percent of Americans considered themselves “very happy,” making ‘57 the happiest year ever for the U.S. And folks in the Roanoke Valley had two good reasons to be happy: They were celebrating the city’s 75th birthday, and they were drinking Dr Pepper – lots of Dr Pepper. So much that Roanoke Valley was crowned the “Dr Pepper Capital of the World.”

One Year in Roanoke: 1957
The efforts of entrepreneur John W. “Bill” Davis, certainly contributed. He left the oil business in Texas in 1936, moved his family to Roanoke and opened a Dr Pepper bottling plant, determined to change Roanokers’ preference for colas. He used radio, TV, personal contacts and about 5,000 different promotions.

One successful campaign had Davis’ salesmen telling six people a day the story of Dr Pepper’s origins in southwest Virginia and give them each a bottle. Those origins reached back to Charles Alderton, who created a new soft drink while working at a Waco, Texas drugstore owned by Christiansburg native Wade Morrison. Legend has it that Morrison named the new drink after Dr. Charles T. Pepper of Rural Retreat – the father of a girl who broke Morrison’s heart. It didn’t help him win the girl, but the story’s romance appealed to Roanokers.

Roanoke native Irving Sharp was second only to Davis as the area’s best-known Dr Pepper salesman. Sharp filled the WDBJ radio airwaves with plugs. He called listeners while Dr Pepper employees simultaneously went to their homes to see how many bottles of Dr Pepper were in their refrigerators. Participants were given a silver dollar for every cold bottle.

Davis’ innovative marketing, including hot Dr Pepper (served with a slice of lemon), drove Roanoke’s Dr Pepper consumption to record heights. From ‘57 to ‘59, and again in ‘61, valley residents were tops in the world."