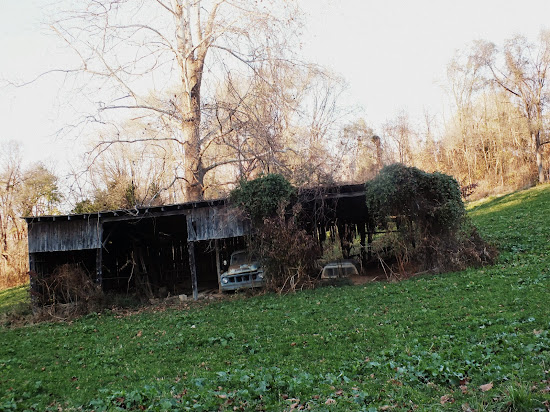 A funny story about this photo. This was taken a little bit after leaving the market yesterday. The boys like the Root Beer they sell there so they each got one. They come in a plastic bottle that the lid screws on and off. So, Dalton is riding shotgun. I stop in the middle of the road to snap this shot really quick, telling the boys to be on the lookout for oncoming vehicles. Then we hear a sizzling type noise coming from the front passenger side. It gets loud, kind of quiets, then starts again...just sounds like a sizzle...sssssss...I'm getting worried thinking "what the heck is that noise?" ...Dalton thinks it's coming from the airbag so I tell him he better move into the back seat, maybe the airbag is about to explode or something. I'm driving slowly trying to figure out where the sound is...all the while looking for a place to pull over thinking I should probably call Nick, I'm not sure if I should be driving with this strange noise...all of a sudden Braden yells "Dalton, you idiot, it's your root beer bottle, the lid isn't on tight"....oh Dalton and I start cracking up, and boy, was I relieved that it wasn't something major with my car or that I didn't call Nick to come get us lol

So now for Willy Nilly's:

1) Ginny asked yesterday about the name Brugh's Mill and if there was an actual mill. Yes, there was but I think it is no longer around from my little bit of research. I found THIS interesting reading on the Brugh family, their tavern and mill. I also posted some info and a picture of the tavern before HERE

2) My dentist appt went well, except for the fact that I need some fillings done. But on the bright side, I really liked the people there...very nice...and it's super convenient to home! Ginny asked how I found my dentist and what happened with the old one. Well, I had been going to my old dentist here because he was referred to me through sports. He's local and I knew him and as a person and dentist I liked him. His office personnel not so much but I didn't worry about it until last week calling them to see when my cleanings were scheduled for this month and the woman at the desk told me she cancelled them because she had called to confirm and I never called her back, and again I got to deal with her "pleasant" attitude...so I told her that as much as I like Dr. So-and-so I didn't care for her rudeness and will not be coming back. I then just called this other dentist that is really close to home and the woman who schedules appointments and answers the phones was SO NICE and got Nick, Braden, Dalton and myself in for our cleanings all within 2 weeks. So Nick and I have had ours and the boys go next week. Ash and Christian had already went to Dr. So-and-so, but they'll have their next cleanings at the new dentist...

3) In honor of Veteran's Day this past Tuesday HERE are some war dogs...and A&E is coming out with this show Dogs Of War ...looks like a great show for a great cause.

4) A while back miss Busy Bee Suz posted about Vanilla Ice and I have been meaning to bring up this show Vanilla Ice Goes Amish ...it's really pretty good!