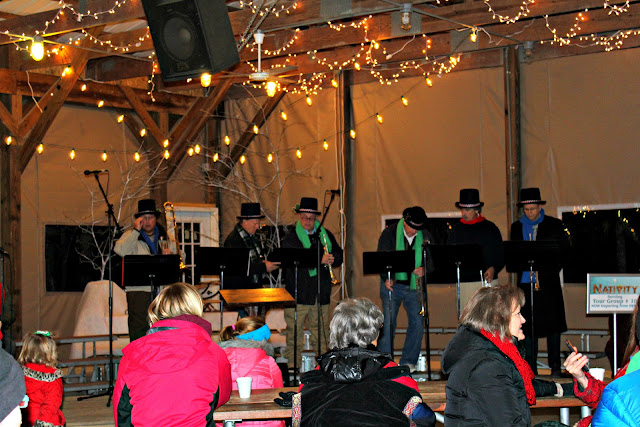 Last night we went and saw the Live Nativity in Fincastle...It was really neat...when we lived in Georgia there was an awesome one we'd go to each year and this was the first one we've seen since...they did a great job! It was pretty cold, I think in the 30's but at least it wasn't windy or rainy! When you arrive you are put into groups then wait for your group to be called, we were group 14...when they called us we loaded a bus which took us to the starting point of the nativity...there we entered the pavilion and were served hot chocolate and cookies and entertained while we waited again for our group to be called...there were these dapper guys performing and we also saw the church choir. This was the only picture I took...planned to take some from the nativity scenes but once we started I was told no flash and it was just too dark for me to mess with my camera so I know ahead now for next time! This was the last weekend the nativity ran...for more info, and a couple of pictures CLICK HERE

Linking up with Mersad's Through My Lens